In the early 70's I reactivated my interest in ham radio, after moving to the east coast and obtaining my old ham gear, an HT-37 and Drake 2A, from my dad in Illinois.   I put up a station in Bowie, MD with a TH-3MKIII on a 40 ft tower bracketed to the house.

The station worked very well, even on the low bands, but JA runs were a dream on any band.

One weekend Carl invited me out to his place to prepare for some contest. He was a gracious host and I was awed by the towers, antennas, and his gear. At some point we needed some RG-8/U stripped for a connector and Carl grabbed a jackknife, put the RG-8 on top of a KWM-2 and proceeded to use the KWM-2 as a workbench, at least once knicking the bezel of the KWM-2 with the knife!  Keep in mind, KWM-2's were still important pieces of ham gear then. Anyway, I saw then that Carl was not interested in the appearance of his station, so much, as how well it operated.  I assessed that observation as a tribute to Carl.

That same evening I got on 20-meters from his station and for the first time heard clear and loud JA's on 20.  Now, JA's on 20 don't seem that exciting, but that night, as a ham rejoining the hobby, they sounded incredible to me.

As I understand it, after hams were shut down in World War II, this was the only way they could get on the air, and even then only under the strictest conditions of control. For those who are saying that the new 60 meter band is the first instance of hams being officially "channelized" by the Government, the attached will show that this is not true.

Karl, before he came to the Washington area and became W3MCG and then W3FA, began his ham career in Madison, WI, as W9AKT. I am intimately familiar with Madison as that's where I went to college and helped found the organization which currently holds the call W9YT while I was there. A lot of the OTs that I knew at the time I was there knew Karl as a teen-ager. 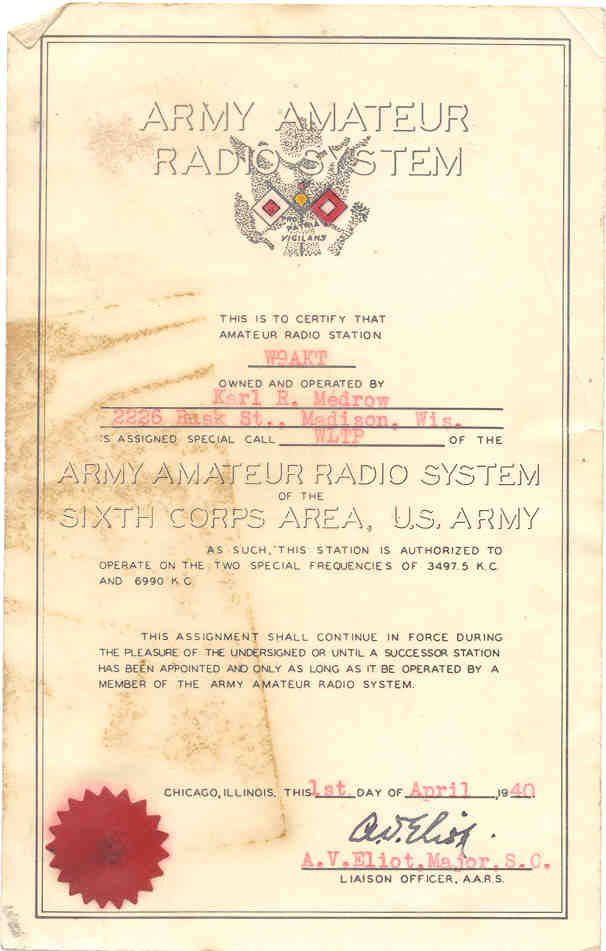